Hand of Fate's Next Event

Our original event for October was to attend EMR's Toys for Tots event. After seeing the lack of attendance/funds that most of us seem to be having lately… I spoke with our captain "Meatcircus" Rick Girt on this and we believe that it would probably be in the best interest of the team and its attendance to make a change to the October event. We feel that we should attend Pentagon for its Free Play Sunday and scenario run by Elmer. Unfortunately I am not sure which weekend the scenario is in October so… if anyone knows the events date please respond to all on this email.

I would like to thank all the guys that showed up for the Black hawk Down Scenario this last weekend. It seemed to really be a hit again this year. I was excited to see the attendance doubled from last year's attendance. I am also ecstatic that all of the feedback from the people I spoke with has been positive. I was having second thoughts about having all of our team playing, instead of having some of you reff but, I must say that the honesty and sportsmanship of all players was exceptional. I really appreciate all of your help with that. People will tend to follow examples and you all did a great job of setting a good example on the field!

I would also like to welcome Keith and John to the fold. It was great to see the you guys there. We need to get another shirt order entered very soon since the Pro shop is out of team shirts. We will be sure to let you know when they are back in stock. I will be sending an email to both of you to get some more info for our teams stats. In the mean time you can be thinking of a "call name" if you have one already great, if not we have been trying to keep with a "meat" theme on our team. Here are a few of the ones who are currently on the team or have been on the team in the past. MeatCircus, Sloppy Joe, Drumstick, Beefy, Butcher, Haggis ,Killer, Kryo, Longshanks, Pumpy, Death Dealer, Hanshaw, Red Leg, Zodiac, DO2K03, Elmer, Foot Long, Gimly, miSteak, PredxSniper, Whopper. Feel free to contact me or Rick with any questions or if you want feel the need to talk paintball (or other stuff I guess LOL). 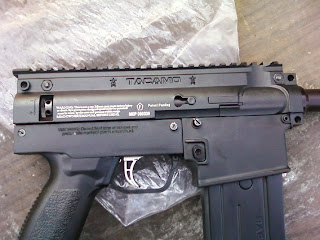 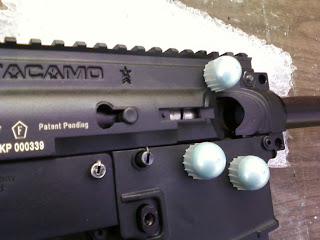 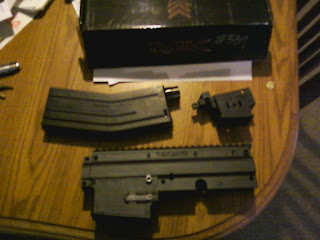 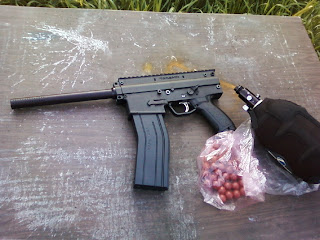 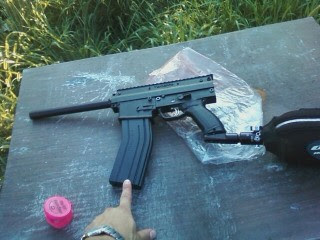 Here are some pictures of the Phenom out of the package and then ready to shoot… I didn't use the cyclone while testing (since I have been using a cyclone for the last 3 years I figured I knew how it worked).

I put about 6-10 mag/reloads through the marker and didn't have any chops. I did have a few no feeds especially in the first couple reloads. After the first 3-4 times compressing the spring and such in the mag, it seemed to work better. I can see some possible issues with the paint we may use from time to time, too big or too small to fit or possibly fall out if the mag is upside down.

I had the mag attached and took off the side breach cover to load the First Strike rounds manually (since the First Strike mags/kits are not out yet). Once I figured out that I had to tip the marker down to allow the heavy front of the FS round fall into the barrel, loading went a lot smoother. Probably about 2-3 times longer per reload than using a stock class pump (around 2-4 seconds) but the accuracy should make up for the extra time. I didn't try using the mag without the breach cover on but I think it would not work too well (the paint would probably roll out the side opening). Also keep in mind that I did not have the detent in the marker to keep the balls from rolling down the barrel, so it allowed the FS rounds to actually enter the barrel, whereas I am pretty sure that the detent would have kept the FS round from entering the barrel and making Loading them much more difficult. I still need to get an extra Detent to try this out for sure… but this is my initial findings. I shout about 25-30 FS rounds.

I did have some minor fit issues on the kit mainly the push pins alignment and being very tight but it was all able to be overcome with a little pressure (and the handle of my screw driver). I would say that the only major flaw in their overall design is the fact that any front shrouds currently made will not fit with the mag kit on. The mag and mag well actually extend much further forward than the original mag causing you to need to chop off the bottom rail of your shrouds to allow them to fit. The stock front shroud for the Phenom and the regular X7s only require a quick cut off of the lower rail but I am not sure how it would affect the AK or other "stylish" shrouds.

I believe that the first potential fail point for the kit will be that way the mag well attaches to the marker. There is not a lot of material on the mag well around the pin holes (and it is the plastic material at that) where the front and rear pins attach the mag well. If you are running and fall with the mag hitting the ground hard I would be concerned that it may break the mag well right off the marker. BUT time will tell.

Overall I think it is a great first attempt at bringing the limited ammo/mag feed marker upgrades (to existing markers). I look forward to see how the First Strike mags work in this… when they are released! I am planning to attend the next game at Battlefront on Aug 20. I am not going to be playing but I will be there for moral support, Blackhawk promotion, raffle prize delivery, and possibly helping reff. I will bring the marker with me if anyone is going to be there to want to look at it. I will also bring it to our Blackhawk game on Sep 10th.

Hand of Fate has accepted a partnership with Valken Products. Since its inception, the team has placed emphasis on a functional, durable and visually appealing uniform its members would be proud to wear on the field.

Team co-founder and co-captain Rick Meatcircus Girt said, "After testing and reviewing product from several other companies, it was apparent that Valken was the most obvious choice to fill the needs of the team. What made Valken most appealing was the array of soft goods offered in our preferred MARPAT camouflage style. With team members who vary so much in size and shape as they do personality and function within the team, it was important that we were able to find items that fit each of our playing styles and still maintain a uniform look".

This year HOF will be heading to new venues, playing new games and continuing to expanding their influence throughout the region. You can find the team this year playing at Three Rivers Paintball, Battlefront, EMR, the WestPoint Spring Classic. But the team can be found most often at Pentagon Paintball in Fairview, PA.

Valken Paintball is proud to sponsor a group of hard chargers like Hand of Fate. Rick Girt and his team are sure to put their V-Tac gear through it's paces in all manner of weather; rain, snow, mud, cold. And it was that "anytime, anywhere" mentality that we had in mind when we designed our products.

Hand of Fate was established as a team in early 2007, and has been growing ever since. The team's passion is playing and growing the sport of paintball, and enjoying the camaraderie of friends and "foes" along the way. For more information on the team, visit www.hofpaintball.com

Hand of Fate represents the Tri-State Brigade of the Valken Corps. For more information on Valken Paintball's sponsorship program, email adam@valken.com or call 866 978 2553.

Great day for a HoF

Great day for a HoF Team Meeting...
Posted by Hand of Fate at 5:41 AM No comments: